After US President Donald Trump announced that the United States is officially recognizing the fact that Jerusalem is the capital of Israel on December 6, 2017, many Arab and Muslim countries sought to make a declaration.

They doubled-down on putting their heads in the sand.

Turkey pulled together the 57 countries of the Organization of Islamic Countries, the OIC, to condemn the statement of the United States. Turkey’s President Tayyip Erdogan said that Jerusalem was a “red line” for the Muslim world and the OIC would reject any recognition of the eastern half of Jerusalem as the capital of Israel. 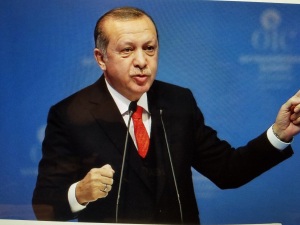 That statement is a bit of a joke, as most of the countries in the OIC don’t even recognize Israel itself.

Even in 2017, almost 70 years after the reestablishment of the Jewish State in the holy land, the presence of Jews still irks too many Muslim nations, including: Afghanistan; Algeria; Bahrain; Bangladesh; Brunei; Chad; Comoros; Djibouti; Indonesia; Iran; Iraq; Kuwait; Lebanon; Libya; Malaysia; Mali; Mauritania; Morocco; Niger; Oman; Pakistan; “Palestine”; Qatar; Saudi Arabia; Somalia; Sudan; Syria; Tunisia; UAE; and Yemen. That’s 30 countries that do not recognize the State of Israel that came together to say that do not recognize its capital.

How is this news?

Here is something that would be ground-breaking for the global purveyors of #AlternativeFacts:

A squandered opportunity to show yet another example of the deep hatred that Muslims feel towards Jewish sovereignty in their holy land.

Instead, the media decided to report that a country like Iran, that has called for Israel to be wiped off of the map, is angry about the US recognizing Israel’s capital. Really.

Are you still paying for that paper that tells you nothing?