There is a myth that has spread into every corner of the world that Jews are foreign transplants in the holy land, even in their holiest city of Jerusalem.

The lie has become so pervasive, that even people that believe that Jews lived in Jerusalem since King David took the city as a capital in 1000BCE, still imagine that virtually no Jews lived in the city from the time Romans destroyed the Second Temple in 70CE until modern Zionism.

But Jews have had a continuous presence in Jerusalem since 1267. For 750 years.

After the Romans destroyed the Second Temple, Jews became scattered throughout the holy land. Many moved to Yavne and points north of Jerusalem, while others left the land completely. But Jews continued to live in and around Jerusalem, and made three attempts to rebuild the Temple:

The Arabs then came to the Holy Land and Jerusalem in 638, and the Muslim invasion ultimately led to battles with Christians from Europe. The Crusades ran from 1099 to 1250, with the Muslims generally allowing Jews to live in Jerusalem, while the Christians killed all non-Christians and banned them from the city while they ruled.

750 Years of Jews in Jerusalem

After the Ramban (1194-1270) won a religious disputation in Spain, he was forced to flee and went to the Holy Land. When he arrived in Jerusalem in 1267 he found only two Jews in the city out of a total of 2000 people (0.1% of the total Jerusalem population in 1267). He set up a synagogue there, which became the center of the Jewish Quarter.

In 1553 Suleiman I came to Jerusalem and decided to fix up the city, including rebuilding the city walls that surround the Old City today. With his investment, the city grew to 16,000 people of which 2000 were Jews (12.5% Jewish in 1553). Not surprisingly, most were Sephardi Jews who had escaped the Spanish and Portuguese expulsions of 1492 and 1497, respectively.

Ashkenazi Jews from Europe and Russia tried to establish their presence as well. In 1694 the first Hurva synagogue was built in the Jewish Quarter, only to be burned down in 1720 when debts went unpaid.

When Napolean came to the holy land in 1799, he issued a “Proclamation to the Jews”:

“…the unique nation of Jews who have been deprived of the land of your fathers by thousands of years of lust for conquest and tyranny, Arise then with gladness, ye exiled, and take unto yourselves Israel’s patrimony. The young army has made Jerusalem my headquarters and will within a few days transfer to Damascus so you can remain there [in Jerusalem] as ruler.”

Napolean failed and the city fell into disrepair again by the 1820s.

Things changed significantly in the 1830s and 1840s, as blood libels came to Damascus, and Druze riots and earthquakes shook Tsfat and Tiberias bringing more Jews to Jerusalem. The Ottoman rulers allowed non-Muslim communities to renovate houses of worship, and four synagogues in the Jewish Quarter –Sephardic and Ashkenaz – were in service. Wealthy and influential British patrons began to focus on Jerusalem, including Moses Motefiore and Benjamin Disraeli, and tourists began to flow into the city – an estimated 10,000 per year in the 1850s – prompting the opening of the first hotels in the city. Montefiore financed the rebuilding of the Hurva Synagogue (opened 1856, only to be destroyed by the Jordanians in 1949).

Jerusalem has had a Jewish majority continuously since 1869.

Theodore Herzl (1860-1904) is considered the founder of modern Zionism. He penned “The Jewish State” in 1896 and convened the First Zionist Congress in 1897. His efforts helped propel the reestablishment of the Jewish homeland in the Jewish holy land. It also helped advance the First Aliyah (1882-1903) of Jews from Russia.

But these events all came years after Jews were already an established majority in Jerusalem.

The city of Jerusalem became divided for the first time in its 4000 year history in 1948, when Arab armies invaded the nascent State of Israel. In 1950, the Jordanians annexed the western bank of the Jordan River all of the way through the Old City of Jerusalem, in a move that was not recognized by almost every country in the world (exceptions being Jordan itself, the United Kingdom and Pakistan). The Jordanian Arabs expelled all of the Jews from the lands they seized and awarded citizenship to everyone, while specifically excluding Jews. Jordan passed a land law that made it a capital offense for any Arab to sell land to a Jew (a law that the Palestinian Authority continues to keep in place).

However in June 1967, despite repeated warnings from Israel to not initiate hostilities, the Jordanians attacked Israel and lost all of the land they illegally annexed, including the eastern half of Jerusalem. Israel reunited the city and annexed it officially on July 30, 1980. The Jordanians finally gave up any claim to the “West Bank” in July 1988. 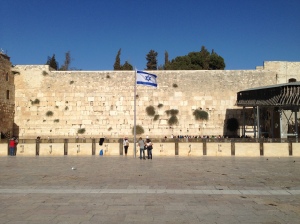 The Western Wall of the Jewish Temple Mount
Jerusalem, Israel

The acting-President of the Palestinian Authority, Mahmoud Abbas stated that Israel is trying to “Judaize” Jerusalem, but Jerusalem has been majority Jewish for almost 150 years, has had a continuous Jewish presence for 750 years, and been the holiest city for Jews for 3000 years – even before the creation of Christianity or Islam. The Arabs’ illegal activities and anti-Semitic laws that removed Jews from the eastern part of Jerusalem for 19 years never had any legal validity, nor the power to erase history.

Jerusalem, and a review of the sad state of divided capitals in the world

Heritage, Property and Sovereignty in the Holy Land

The Anthem of Israel is JERUSALEM