The number one star of YouTube – by a wide margin – is a Swedish guy by the name of Felix Kjellberg, known to his fans as PewDiePie. This week, Disney announced that it was severing all ties with the Internet sensation, after it was revealed that PewDiePie made many anti-Semitic jokes and posted Nazi imagery in his videos.

The Wall Street Journal gave the story a prominent position. It wrote about it on the front page on February 13. It followed up on the next day, giving the story a dominant position on the cover of the B Section of the paper with a large color picture, graphics and story that continued inside. 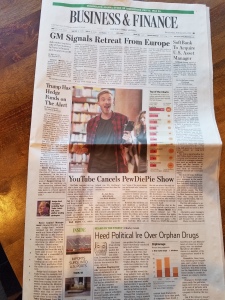 One would have a hard time finding any mention of the story in the New York Times.

Somewhere on page B3, under a section titled “Arts, Briefly” among various pictures about other news stories, there was a small mention in the final story called “Maker Studio Drops YouTube Celebrity.” No pictures, no graphs. Just a small story nestled among the crossword puzzle, KenKen and movie listings. 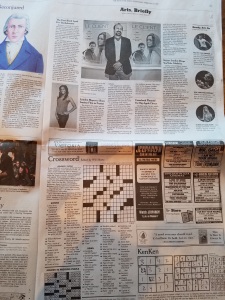 The New York Times is obsessed with media and the arts. It features a special Arts section every day, and most days there are cover stories about racism and bigotry in the arts such as “Dealing with #GrammysSoWhite” on the same day as the PewDiePie story. But that story about possible bias against blacks was on the cover page and included a picture. On February 16, the front page of the Arts section had an article about racism in the Oscars, with a story titled “Oscar Trail is a Leader’s Pathway to Progress.”

The Grammy’s, with a viewership of about 25 million, had follow up stories on the cover page about possible racism, long after the event. The Oscars, which have not even happened but typically get about 37 million viewers, had a lead up cover story about racism.

But the number one YouTube star with 53 million followers who posts constantly, barely got a mention in the Times for being terminated for anti-Semitic posts.

It is a sad continual story of the liberal paper’s refusal to acknowledge anti-Semitism in the world. Does it make the paper anti-Semitic? Read the related articles below before you decide.

The Media Finds Religion in Matters of Security. Sometimes.