It has been several decades since any rabbi delivered a prayer at a presidential inauguration, the inauguration of President Ronald Reagan in 1985 being the last one. In Reagan’s and each of the prior events, the prayer was delivered by a rabbi from the Reform or Conservative movements. In 2017, at the swearing in of President Donald Trump, an Orthodox rabbi finally took the stage.

Rabbi Marvin Hier, is a well-known rabbi on the national and international stage, as dean and founder of the Simon Weisenthal Center and the Museum of Tolerance. He also founded Moriah Films which has won two Academy Awards. His credentials in combatting hatred and in educating the world about the evils of the Holocaust are beyond reproach. 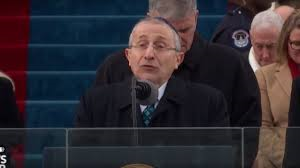 Why did Trump invite a rabbi when Obama, the Bushes and Clinton did not do so? Why invite an Orthodox rabbi, the smallest of the Jewish denominations?

A major factor to consider must be that Trump’s daughter Ivanka and her entire family are Jewish. And Orthodox.

Trump also hails from New York City and built his business in the real estate industry, where many Jews live and work. He has gotten to know many Jews – and Orthodox ones in particular- over many years. That is in sharp contrast to past presidents who were lifelong politicians, a profession with fewer Orthodox Jews.

The point that I will add here is that it should not be a surprise that the first party to include an Orthodox rabbi in one of the greatest of human occasions – the peaceful transfer of power of the most powerful nation in the world – was the Republican party.

The Pew Research group did a comprehensive survey of American Jews in 2013, and published the results in August 2015. The survey found that “American Jews tend to be more highly educated and politically liberal than the U.S. public as a whole,” but one group did not fit that pattern: the Orthodox, which are 57% Republican-leaning.

“Unlike most other American Jews, Orthodox Jews tend to identify as Republicans and take conservative positions on social issues such as homosexuality. On average, they also are more religiously committed and much younger than other U.S. Jews, and they have bigger families.

“…the median age of Orthodox adults (40 years old) is fully a decade younger than the median age of other Jewish adults (52). Despite being younger, more than two-thirds of Orthodox adults are married (69%), compared with about half of other Jewish adults (49%), and the Orthodox are much more likely to have minor children living in their household. On average, the Orthodox get married younger and bear at least twice as many children as other Jews (4.1 vs. 1.7 children ever born to adults ages 40-59).

So while Orthodox Jews only make up about 10% of the 5.3 million American Jews, they are the fastest growing denomination by far. The implication is that even as Democrats point to the growth of the non-white population in the USA as favoring the Democrats, within the Jewish minority, the Republicans hold an advantage.

Rabbi Hier spoke for just two minutes after President Trump was inaugurated. In his remarks he recited a passage from Psalm 137: “By the rivers of Babylon we wept as we remembered Zion… If I forget thee o’ Jerusalem may my right hand forget its skill.” It was an interesting choice of quotes, as the Obama Administration let the area of Babylon – in today’s Iraq – fall into an Islamic jihadist war zone, and neighboring Iran have a pathway to nuclear weapons. In regards to Jerusalem, Obama abandoned Israel at the United Nations, letting a motion pass that declared that the eastern half of Jerusalem which houses the Jewish Temple Mount and all of the West Bank were illegally controlled by Israel.

Conversely, the Trump administration has broken with Obama’s view that Jerusalem is occupied Palestinian territory, and has vowed to move the US embassy from Tel Aviv to Jerusalem. It is a campaign promise that many presidents have made only to reverse course once they assumed office, however, it would appear that Trump is likely to follow through with his pledge.

Did Hier deliberately use the quote to voice the displeasure of the pro-Israel community with Obama? As encouragement to Trump to honor his pledge to Jerusalem?

It had been over 30 years since a rabbi was invited to give a blessing at the presidential inauguration. While it was a special moment for all Jews to celebrate, many liberal Jews tried to petition Hier to withdraw as they disliked Trump’s stated policies. It was a shame that in the divisive election campaign between Democrats and Republicans, Jews could not pause to appreciate the acknowledgment and invitation that was extended to their small community.

“Jews as a Class”

6 thoughts on “An Orthodox Rabbi at the Capitol”