Once again, the Obama administration has refused to stand with Israel as it confronts terror.

On January 8, 2017, a terrorist rammed a group of soldiers who had just exited a bus in Jerusalem. At least four were killed. The US State Department made the following statement in response:

“We condemn in the strongest possible terms today’s horrific vehicular attack by a terrorist in Jerusalem.‎ There is absolutely no justification for these brutal and senseless attacks. We‎ condemn the glorification of terrorism now or at any time and call on all to send a clear message that terrorism must never be tolerated.

Our thoughts and prayers are with the families of the four Israeli soldiers who were killed, and we hope for a full and fast recovery of those injured.”

Stating their is “no justification” for violence but NOT stating that America stands by Israel and the people of Israel in combatting terror IS JUSTIFYING TERROR. The Obama administration just let a UN resolution claiming that the 1949 Armistice Lines are actual borders is a reward for terror. Propping up the acting President of the Palestinian Authority whose term expired eight years is rewarding terror. 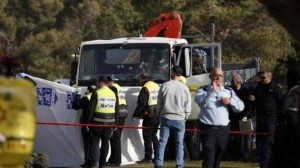 Consider the State Department’s response to the car ramming attack in Nice, France:

“Today’s horrendous attack in Nice is an attack against innocent people on a day that celebrates Liberty, Equality, and Fraternity.

On behalf of all Americans, and especially the great many with close ties to France, I offer our deepest condolences to the friends and family of those who were killed and our hopes for a speedy recovery to those who were injured.

I was proud to stand alongside French leaders earlier today at Bastille Day celebrations in Paris, and the United States will continue to stand firmly with the French people during this time of tragedy. We will provide whatever support is needed.

This US administration has done this to Israel time and again.

Consider the attacks in the fall of 2015, as detailed in “Select Support in Fighting Terrorism from the US State Department.” The US stood by the governments of Chad, Lebanon and France in terrorist attacks. But not Israel.

In reviewing the global terrorism in the summer of 2015, as detailed in “The US State Department Does Not Want Israel to Fight Terrorism,” the US supported the governments of Turkey, Afghanistan and Cameroon in combatting terrorism. But not Israel.

The terrorism of January 8 , 2017 fell out on the Jewish fast day of the 10th of Tevet. It is a holiday where the Babylonian leader Nebuchadnezzar began to lay siege to Jerusalem.  The city would not fall for another 30 months, but Jews have commemorated the beginning of the siege for 2500 years. History has shown that calamities often do not come out of the blue, but start with incremental steps. Each one is a tragedy.

Just a few weeks ago, the Obama administration let a UN resolution pass which stated that it was illegal for Jews to live in the entirety of the Old City of Jerusalem. Obama once again continued to make clear that it will not stand with Israel while Jews are murdered in the city.

A question for Jews to ponder is whether the commemoration of the US abandoning Israel should be marked on December 23 when the UN Resolution 2334 passed, or January 20, 2008, when Obama was elected to office.

John Kerry: The Declaration and Observations of a Failure

US Hypocrisy – “Reasonableness and Restraint”