The Obama Administration let a United Nations Security Council resolution condemning Israel (Res 2334) pass in December 2016 to the anger of many Americans.  The US Congress took it upon itself on January 5, 2017, to condemn the UN action as a bipartisan effort, voting to condemn it by a margin of 342 to 80 (with 4 people voting Present and 7 abstentions). A total of 233 Republicans and 109 Democrats stood by the US’s ally in a bill entitled “Objecting to United Nations Security Council Resolution 2334 as an obstacle to Israeli-Palestinian peace, and for other purposes.” Of the 80 people voting against the measure, 76 were Democrats to only 4 Republicans.

“This Administration has lost all credibility when it comes to Israel. The Administration’s stunt at the UN hurt our ally Israel and made peace in the region even more difficult to achieve. This Thursday, the House will not abstain from its responsibility and will vote on a bipartisan resolution reaffirming our longstanding policy in the region and support of Israel.”

While Republicans voted to condemn the UN vote by a margin of 233-to-4, the Democrats barely achieved a majority of consensus, voting 109-to-76, with 8 others not voting at all.

Rep. Keith Ellison, who is running to be the new chair of the Democratic National Committee (with the support of Sen. Bernie Sanders) was one of those Democrats that decided to vote against the effort to condemn the UN censure of Israel. 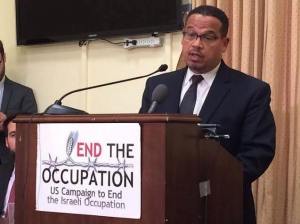 Ellison’s action was not a surprise to many.

Ellison was one of the 50 House Democrats to boycott Israeli Prime Minister Benjamin Netanyahu’s speech to Congress in 2015. A big Democratic supporter, Haim Saban said recently that Ellison “is clearly an anti-Semite and anti-Israel individual.” But leading Jewish Democrats in the Senate like Charles Schumer and Bernie Sanders have still rallied to Ellison’s defense and continue to support his candidacy.

If this is how Ellison votes when Americans are focused on him and his bona fides, how will he treat Israel in the future? Will he continue to turn Democrats against Israel? Will he support more actions at the United Nations to condemn the leading democracy of the entire Middle East?

If Ellison becomes the new chair of the DNC, it will be the final straw for this lifelong Democrat.

Bernie Sanders is the Worst U.S. Presidential Candidate for Israel Ever

Missing Netanyahu’s Speech: Those not Listening and Those Not Speaking

The Democrats’ Slide on Israel