“Democracy is the worst form of government, except for all the others.”

“The best argument against democracy is a five-minute conversation
with the average voter.”

Democracy is a system of government in which the people get to decide for themselves who will be their leaders. In some situations, people make their choices directly, in others, they elect representatives who ultimately choose the leaders. In either case, citizens are often guided to their decisions by professionals, both in the media and in government.

The 2016 contest for president of the United States of America was a whirlwind, and the two primary parties took very different paths to nominate their ultimate candidates. Those paths ended with individuals at polar extremes.

The Democrats worked with party favorites and their political machine to nominate a long-time political insider, Hillary Clinton.  The Republicans let the American citizens override their guidance to nominate a complete political-outsider.

Clinton, Arm-in-Arm with the Democratic Machine

Clinton had the Democratic Party backing her the entire way.  The head of the Democratic Party, Debbie Wasserman Schultz, took many actions to favor Clinton in the primaries. It included having only a few debates and revoking Bernie Sanders’ access to voter data.  Leaked DNC emails made clear that the Democratic party sought to actively undermine Sanders – including by questioning his religious affiliation – in an incident that forced Schultz to resign.

The immoral actions against Bernie Sanders were embarrassing, but only half of the story.  The Sanders’ left-wing fringe campaign could not score many “superdelegates,” (those Democratic party bigwigs that supported the lifetime politician) which undermined a pure democratic process.

The Democratic machinery did not stop pushing Hillary after crushing Sanders. It continued to operate for Clinton in similar ways against Trump.

After Schultz was forced to resign, her position in charge of the DNC was handed to Donna Brazile, who was a commentator with CNN.  It was soon discovered that Brazile leaked questions to Clinton before one of the presidential debates, giving Clinton an unfair advantage. Like Schultz, Brazile was subsequently forced out of the DNC.

Hillary Clinton may claim that she is “not a natural politician” like her husband, but she is the very embodiment of a crony politician, in bed with the political and media establishment.

Trump on the Outside

Donald Trump was not just a political outsider who had never run for any governmental office. He was also spurned by the Republican establishment and conservative media.

Many of the Republican candidates for president and other politicians refused to endorse Trump, and several loudly criticized him:

The list goes on, including from various members of the Bush family.

The conservative media treated Trump no better, including Bret Stephens of the Wall Street Journal and Bill Kristol of the Weekly Standard. 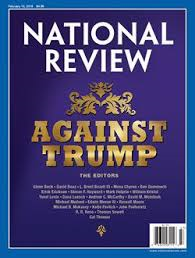 Sarah Palin, who had run for Vice President on Sen. John McCain’s ticket in 2008 called out the Republican establishment for turning their backs on Trump:

“Even today, the G.O.P. machine, they’re attacking their own front-runner, and his base of dynamic, diverse, very patriotic supporters.  They’re attacking you! They can’t afford the status quo to go. Otherwise, the gravy train, it stops and they can’t keep slurpin’ from it, not if things change the way that Mr. Trump and all of we know needs to change.”

Trump was not only a political novice.  He ran without the support of the Republican party and was saddled with a conservative media which constantly sought to bring him down.

By any account, such a contest would likely have been unfair. A lifetime politician with the complete backing of the political machine and media, AND the backing of the sitting president AND a family foundation which peddled influence for money, stood opposite a complete novice.  That first-timer was undercut by his party and the media, AND by the Republican Speaker of the House, Paul Ryan.

How could the American people possibly ignore all of the money, media, power and politics? The results were clear before the first vote was cast. There was really no reason to vote.  Clinton will be your president. So said the establishment.

The people decided for themselves, as they went to the polling stations with their own opinions.

Winston Churchill, the venerated leader of Great Britain during World War II and in the 1950s, had very mixed feelings about democracy.  While he admired the concept of people deciding upon their own futures, he felt that most people were incapable of properly understanding the issues and proposed solutions to arrive at a logical conclusion. Just have a “five-minute conversation with the average voter,” he would say.

So the Democratic party offered Americans a crafted Hollywood Democracy, full of fake sets, scripts and voice-overs to make them feel good as they were ushered to the voting booth with their ballots already filled in. The Republican party would have preferred that approach as well, but let the American people move forward with a Naked Democracy, without any supporting actors.

In 2016, the American people voted directly for the naked novice.  Will they now decide for themselves if they are happy with the results, or will they wait for the media establishment to inform them about their feelings?