For over a year now, we have heard from the left-wing media that right-wing extremism is more of a threat than Islamic terrorism. We have watched the uber-left decry Republican capitalism as inherently evil and corrupt. Barack Obama made fun of the right-wing’s primitive infatuation with guns and religion, as he sought laws to limit their accessibility to guns. And Hillary Clinton, the Democratic candidate for president, proudly declared that she was proud of making enemies with 41% of Americans, the Republicans, whom she derided as “deporables.”

The Republican nominee, and now President-elect, Donald Trump, said that he would seek to deport foreigners that were in the country illegally, and build a wall along the southern border to minimize people from illegally crossing into the US from Mexico. He announced that he would limit Muslim immigration from countries that spawn terror and are at war with America and its allies. Trump declared that he would have an “America First” policy, putting foreign trading partners on alert.

Neither side was nice, and neither can understand how they vilified the “other” in a way that was inappropriate.

Whether from fear and concern, or hope and aspiration, Americans wanted to change. But the change that they sought put others in their crosshairs. Their comments blanketed entire groups unfairly, and raised the distrust and anger of people. 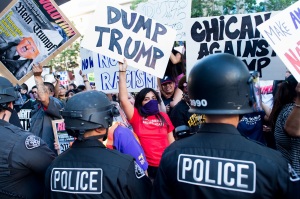 Police form a line to contain protesters outside a campaign rally for Republican presidential candidate Donald Trump on Thursday, June 2, 2016, in San Jose, Calif. A group of protesters attacked Trump supporters who were leaving the presidential candidate’s rally in San Jose on Thursday night. A dozen or more people were punched, at least one person was pelted with an egg and Trump hats grabbed from supporters were set on fire on the ground. (AP Photo/Noah Berger)

The aggressive demonization of the right by the American left-wing produced a backlash in November 2016, as Americans elected a political novice to office. Many liberals have doubled down on their taunts, and taken to the streets in protests and riots. Meanwhile, the Americans that nominated Trump are deaf to the protests, as they hope that the global (and American) forces that made them fearful and defensive, will be combatted at last.

We Americans have a corrosive approach to the “other.” The global warming that environmentalists call out, may come from all of us being too hot-headed. We should consider how to improve our situation AND become more united.

Rather than insulting someone, try simply disagreeing with their position, rather than their person.  You might also consider saying “hello.”

Magnifying the Margins, and the Rise of the Independents

Crises at the Borders