The race for the president of the United States in 2016 has regrettably not been about issues, but character. Both Democratic candidate Hillary Clinton and the Republican candidate Donald Trump have been tarred-and-feathered by their opponents mostly because of actions or statements that they have made, rather than on positions and policies they plan to introduce should they be elected.

Still, in the statements that the individuals have made, there is a sense of how each views the world around them, and in particular, the attitudes towards radical Islamic terror.

At first glance, bumblebees look scary. A person seeing the bee’s colors or hearing the buzz of its wings, may either look to run or to kill the insects. However, many knowledgeable people will tell you that the bumblebees will not bother you if you leave them alone.

That attitude is found in the radical left, like Jill Stein of the Green Party, and to some extent, Gary Johnson of the Libertarian Party. Stein believes that all people are inherently good, so people will only attack if provoked. Johnson is less of a purest on intent, but more of an isolationist, so wants America to retrench from around the world to just focus on home. According to these candidates, radical Islamic terrorism will spare America, if America does not act aggressively in the Middle East.

A crocodile is often described as the meanest creature on the planet. At the very moment a crocodile is hatched, it will bite the first thing that it sees.

Trump believes that Islam has potentially very dangerous ideas that are incompatible with democracy and American values. As such, he has stated that he would curtail immigration from all Islamic countries that are engaged in wars or spawn terrorism. Trump believes that the jump from moderate Islam to radical Islam is too small and difficult to track, and since radical Islam is a real and persistent threat, draconian actions are required to protect American interests.

Pitbulls have a mixed reputation. Many dog owners see the dogs as beautiful, elegant and strong. Others see the breed as a menace that can turn quickly and kill or maim people.

Clinton views Muslims in a similar light. She believes that Islam is not inherently bad or inclined towards violence. However, she does not deny that a strain of radical Islam is present in the world and killing men, women and children. As such, her views suggest a combination of empowering the American Muslim community and monitoring their activities. 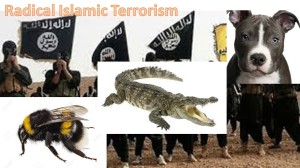 The radical left argues that the world is full of bees. These dreamers believe that foreigners who look threatening really aren’t, they’re simply misunderstood. Some of these liberals have gone into the hives in an effort to befriend these misunderstood communities, sometimes as volunteers to rally for the “peaceful” cause. Some were killed – like Vittori Arrigoni – while they basked in their naivete.

For their part, the radical right will have you believe that entire classes of people are inherently evil. Such “devils” would ideally be avoided, but should they pose a threat to America or its allies, the right would advocate for the evil to be exterminated. Should those suspicious people seek entry into the United States, the right-wing would argue for “extreme vetting” before permitting their immigration.

Those in the middle think in a more nuanced fashion. They understand that there are good and bad people everywhere. The center argues that there is no reason to curtail immigration for Muslims, any more than placing a nationwide ban on pitbulls.

The reality is that the various approaches are right and wrong, depending on the issues.  The world has bumblebees AND crocodiles AND pitbulls. There is no single approach to dealing with a large, complicated world.

The left’s desire to say that all people are alright and that everyone is created equal fails to see the world for what it really is. The right’s desire to see piranhas and crocodiles in every body of water will foster fear and force unnecessary retrenching of resources. And the people who embrace caution but equivocate, are only balancing the extremes.

Today, America lacks honest and clear leadership, that is both kind and courteous, while also being politically incorrect, as appropriate.

Society would be better served in not seeing everything as black-or-white, but not being deceived that everything is grey. As important, our leaders should have clarity of what is white, grey and black.  How can people trust leaders to develop solutions, when those leaders are blind to reality?

For example, the radical left-wing of Bernie Sanders and Elizabeth Warren have more contempt for bankers than they have for ISIS. Hard-working honest bankers are labeled crocodiles, while ISIS is labeled a pitbull. Such politicians cannot be trusted to lead.

The radical right-wing looks at immigrants from Latin America seeking economic opportunity in the USA, the same way that it looks at people returning from fighting for ISIS. What is the basis for lumping these people together?

Today, America’s leaders have fed their constituents fat lies.  The left-wing dreamers would prefer to takedown capitalism over terrorism.  The right-wing would take out all Muslims rather than just the extremists. If politicians cannot properly identify our obvious enemies, how can we elect them as leaders?

Republican Scrutiny and Democratic Empowerment of Muslims in Minnesota

Crises at the Borders

“Jews as a Class”

A Logical Approach to Immigration from Personal History

Magnifying the Margins, and the Rise of the Independents

5 thoughts on “The Presidential Candidates on Islamic Terrorism: The Bumblebee, the Crocodile and the Pitbull”