Everybody likes to count.  Everyone wants to matter.

In the United States, people are raised from childhood believing that their opinions are worthwhile, and that their votes are both sacred and important.  Americans are taught that there are many countries which deprive their people of the right to vote, and indeed, that even the US itself deprived many of its own – specifically women and blacks – such right for much of the nation’s history.

So as the presidential election comes just every four years, people contemplate how they will use their special rights in this remarkable country.

The Shame of the American No Vote

In reality, the United States has a terrible record of showing up to vote.  In the 2012 presidential election, even though 8 million more people were eligible to vote than in 2008, 5 million fewer showed up at the voting stations.  The 57.5% voting turnout choosing between the incumbent Democratic President Barack Obama and Republican Mitt Romney was embarrassing.

Compare that voter turnout to other democracies:

The Pew Research center considered the US voting history weak compared to developed countries according to an August 2016 report.  Many Americans do not even register to vote, and many have concluded that the US system of deciding winners based on the electoral college makes the vote in their state meaningless. Consequently, they don’t show up to cast their ballot on election day.

And that was the history in the USA when people were actually excited about the candidates.

The Only Protest: Voting the Libertarian Party

In the 2016 presidential contest, Americans are told that they must choose between a candidate they loathe and a candidate they despise. On the Democratic side, the career politician Hillary Clinton is running on a troubled history as Secretary of State, at a time when people want change in D.C. On the Republican side, Americans are certainly seeing change – every day – from an unpredictable real estate mogul who claims to be able to “make America great again” by making everyone feel bad all of the time.

As described in “Magnifying the Margins, and the Rise of the Independents,” the two main US political parties continue to shrink every year.  Democrats now account for 30% of the electorate and registered Republican are only 26%.  Meanwhile, Independents are 43%, significantly more than either of the two so-called major parties.

But the current political process benefits the entrenched, the incumbents, the powerful and the famous. They are the ones who get the media attention, endorsements and center stage. Most Americans have never even heard of Gary Johnson, the Libertarian presidential candidate. 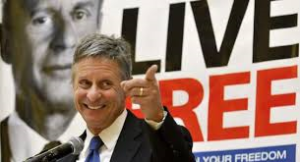 Make no mistake, Johnson is also a flawed candidate. But it doesn’t matter.

When people think their vote really matters, they do not want to have responsibility for electing a deeply flawed leader.  But staying away from the polls in a gesture of protest is no protest at all, despite what George Will claims. It is resignation and retardation to a dishonorable past when people were prohibited from voting.

You pay taxes. Get up and vote!

If someone honestly feels strongly about voting for either Clinton or Trump, by all means, vote for that person; that’s what a free society and elections are all about.

However, if someone despises both candidates – particularly in deeply red or blue states where their vote really doesn’t matter at all – it is extremely important to lodge a protest by voting for the Libertarian party, the only party based on the principles of America’s founding fathers: liberty for all.

Voting for the Libertarian party in 2016 is the only way to simultaneously validate that your vote matters, and absolve you of the responsibility and embarrassment of electing either Clinton or Trump.

If you want change, make it happen. As a famous founding father said:

“Shall we acquire the means of effectual resistance by lying supinely on our backs and hugging the delusive phantom of hope, until our enemies shall have bound us hand and foot? Sir, we are not weak if we make a proper use of those means which the God of nature hath placed in our power.“

If You Want to Take Money out of Politics, Liberal Leaders Suggest Voting for Trump

14 thoughts on “Libertarian Validation and Absolution”