On May 19, 2016, Israeli Prime Minister Benjamin Netanyahu announced that he was considering adding a right-wing party, Yisrael Beytenu, to his coalition. The Palestinian Authority’s reaction to this rumor was quick.

“The Israeli government sent a message to the world that Israel prefers extremism, dedication to the occupation and settlements over peace.”

In a region which has perfected finger-pointing, the Palestinian Arabs have once again shown their mastery of hypocrisy.

On June 2, 2014, the Palestinian Authority (PA) welcomed the terrorist group Hamas into a unity government. That move abruptly ended the many months of peace negotiations going on between Israelis and the PA which was shepherded by US Secretary of State John Kerry.  Within two weeks of forming the unity government, Hamas loyalists kidnapped and murdered three teenage Israelis and launched a war against Israel that killed thousands.

That’s a message of preferring “extremism” to peace.

Care to do a simple comparison of Yisrael Beytenu and Hamas?

Hamas is considered a terrorist group by many countries,

So should anyone be surprised by the audacity and hypocrisy of the PA condemning Netanyahu for bringing Yisrael Beytenu into his coalition?  Which party has aligned itself with racists and murderers, and shown a complete unwillingness to compromise and make peace time-and-again, Netanyahu or Abbas? 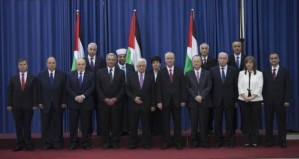 The Undemocratic Nature of Fire and Water in the Middle East