Israel’s Ministry of Economy and Industry had a section of Hall 5 with 65 companies presenting, including Audiocodes and Alvarion. In Hall 2, the Israel Marketing Association had meeting spaces for over 20 companies including Kaltura and Radware. Other Israeli companies had large stand-alone booths in various halls including Allot Communication and Amdocs. And there was yet additional Israeli representation that was only observable to the observant, where Israeli technologies (as opposed to the companies) were featured within large non-Israeli companies that had acquired Israeli firms, such as Red Bend Software within Harman. 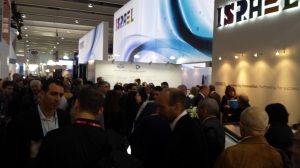 The various Israeli companies attested to the enormous technology leadership that the small country had at the show. Thousands of people came to the Israeli booths to meet with their existing business partners and to learn about emerging technologies such as those from StoreDot and Insert.

Despite the significant Israeli presence, the MWC decided not to highlight Israel among the flags of the world at the show.

At the inside courtyard at the show’s southern entrance, and outside at the northern entrance, the MWC hoisted the flags of dozens of countries. They included countries that were prominent at the show including the United States, the United Kingdom, South Korea, Japan, China, India, Germany and Spain. Yet there were also flags of countries with little presence at the show, including: Mexico; Ukraine; and Argentina. Remarkably, the flags of Saudi Arabia and Iran were also flying high in the air.

But Israel’s flag was absent.

30 flags from around the world inside the entrance at MWC in Barcelona, Spain
(photo: First.One.Through)

A little over 500 years ago, Spain expelled its 200,000 Jews, but recently, the country made efforts to mend ties with Jews. It finally recognized Israel as the homeland of the Jewish people in 2011, and in 2012, the country stated that it would grant Spanish citizenship to those Jews who could demonstrate that they were descended from Jews expelled in 1492. The same day that the Barcelona conference began, another city in Spain announced that it would not participate in any BDS (boycott, divestment and sanctions) against Israel.

For its part, the Mobile World Congress clearly did not participate in any BDS activity in allowing over 140 Israeli companies to present at the show. They did not block over 1000 Israelis from attending the event. Yet why did the blue and white Israeli flag with the Star of David get snubbed?

MWC published an article that was broadly distributed on the first day of the show about a study completed by the large Spanish Telecom phone company, Telefonica, about the state of the digital ecosystem among 34 countries. Among the findings highlighted in the MWC article, was that Saudi Arabia was, by far, the country with the worst digital ecosystem relative to the country’s wealth.  Yet MWC chose to fly the flag of the Kingdom of Saudi Arabia (KSA) outside the convention center, alongside the Spanish flag.

What do you think could have been the thinking of flying the flag of Saudi Arabia, but not flying the Israeli flag?

The EU’s Choice of Labels: “Made in West Bank” and “Anti-Semite”

1 thought on “Israel is Found and Lost in Barcelona”