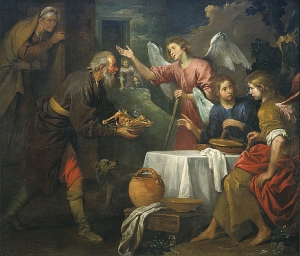 Jewish perspective: Judaism prides itself in being a religion of actions, not faith. God gave the Jewish people 613 commandments to follow, some of which are active (make the Sabbath holy) and others that are passive (don’t kill). A division could also be made of laws between people (like murder) and those between man and God (like the Sabbath).

A casual observer of religions would imagine that laws about God would take precedence to laws about people.  The Jewish organization Limmud, posted an article about Vayera, which argued the opposite.

During the story of Vayera there was an encounter between Abraham and God. In the middle of the conversation, Abraham asked God to wait so he could welcome three strangers that were passing his tent. The author of the Limmud article, Jeremy Rosen argued that Abraham’s action taught Jews a lesson for today, “that however primary God is, there are certain types of human crises or obligations that are so important that one can actually tell God to wait. In the end religion must enhance our relationship with other humans.”

Islamic perspective: The website “OnIslam” is dedicated to educating Muslims on a variety of subjects. An article on hospitality and the “joy of honoring others” made a clear effort to differentiate between the kind of hospitality that Muslims extend, and those of non-Muslims. “The true concept of hospitality is not something that is widely practiced in most non-Muslim countries. For many non-Muslims, the entertainment of guests is of primary importance in many cases for worldly reasons only, not rooted in real hospitality for the sake of God. In Islam, however, hospitality is a great virtue that holds a significant purpose. Being hospitable to neighbors and guests can increase societal ties as well as unite an entire community. Most importantly, God commands Muslims to be hospitable to neighbors and guests. There is a great reward in doing so. Hospitality in Islam is multi-faceted and covers many different areas in addition to the hospitality that we show guests who visit our homes.”

In Islam, hospitality is performed because it is commanded by God. The act of hospitality may have benefits of creating communal harmony, but it is a derivative of the second degree. The primary obligation is to follow God’s command, and He commands all Muslims to be hospitable. God’s command leads man to action, and such action may, in turn, lead to friendship and social cohesion.

The difference in the approach of the religions is both subtle and significant. Judaism has a value system of helping others. Welcoming a stranger takes precedence to a direct conversation with God. In contrast, Islam focuses on obedience to God’s commands. Hospitality happens to be one of those commands and is therefore performed – within the bounds of religion.

Hospitality Today on a National Level

It is interesting to look at the nature of hospitality on a national level and how the one Jewish State handles hospitality compared to various Muslim countries (note that there are many Muslim countries, like Turkey, Malaysia and Indonesia, that are NOT Arab and descendants of Abraham).

Welcoming Refugees
Israel: Israel has an incredible record when it comes to welcoming Jews from around the world. Whether in bringing Jews that were persecuted in the Arab world in the 1950s, or Russian and Ethiopian Jews in the 1990s, Israel took in so many Jews from around the world, that they dwarf the number of European Jews who came to the country due to persecution in Europe during the 1930s and 1940s.

Those Moroccan, Yemenite, Ethiopian and Russian refugees received Israeli citizenship immediately. They got housing and job training. They had teachers to teach them a new language (Hebrew) and lessons about incorporating into a society that was completely foreign to their old way of living.

Arab/ Muslim Countries: The Middle East has witnessed a large number of wars and corresponding waves of refugees fleeing the battles. Many Arab countries did not welcome their fellow Arabs.

Welcoming “Others”
Israel: The phrase in the bible “love thy neighbor as thyself” (Leviticus 19:18) has been interpreted by various scholars as both a model for treating fellow Jews and for interactions with all of mankind.

Arab/ Muslim Countries: The Arab countries do very poorly in regards to their hospitality with non-Muslims.

Helping Others
Israel: Israel has a reputation of rushing to assist countries around the world suffering from natural disasters.  Whether from earthquakes in Turkey or Haiti or tsunamis in the Pacific Ocean, Israel is on the scene with disproportionate numbers with life-saving assistance.

Arab/ Muslim Countries: The Arab world typically does not send much assistance to countries in need.  That fact is surprising since it is a core tenant of Islam.  OnIslam states: “In Islam, hospitality extends well beyond the walls of the home. Being hospitable also means having good manners and treating others with dignity and respect. Hospitality can be applied to the greater community and Muslims must strive to help out whenever there is a time of need. Natural disasters, for example, often result in community turmoil as residents grapple with the aftermath. This provides Muslims with an excellent opportunity to pitch in, whether delivering hot meals to those affected or donating gently used items to someone who has lost everything.”

However, the Charities Aid Foundation did rank some Islamic nations among the most generous in the world, including: Malaysia; Indonesia; and Iran in the top 20.  However, none of those three countries is Arab.  Israel, the Jewish State, ranked number 32.

Abraham taught Jews and Arabs about the importance of hospitality.  Each group interpreted his acts of kindness through their respective prophets and teachers over the centuries, with Jews extracting a primary value of the kinship of men, while Muslims placed hospitality as just one of God’s commands to be observed.  Jews learned a life-lesson from Abraham; Arabs stifled that more human example and took the message of hospitality from the Quran.

The children of Abraham – the Jewish State and the Arab states – should all be mindful of the importance of hospitality in their dealings today.

The End of Together

11 thoughts on “Abraham’s Hospitality: Lessons for Jews and Arabs”