On July 9, 2011, the world welcomed a new country, South Sudan, which separated from Sudan. South Sudan rapidly became a failed state, one in which the central government lost the ability to control the security and economy of the country.

Failed states suffer from many terrible and unstable features: lack of governmental control; factional militias and armies; lack of border integrity and gross poverty. These societies often see rampant human rights abuses as various parties assert control over parts of the country and seek vengeance and control over minorities and local populations.

Consider some reports from South Sudan over the past year:

According to Business Insider, the worst failed states include: South Sudan; Sudan; Somalia; Congo; Chad and Yemen. The populations of these countries are forced to flee, suffer or die. 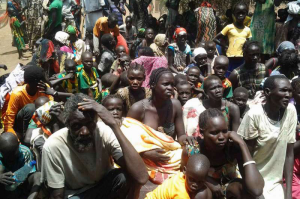 South Sudanese refugees wait to be registered at a crossing into Ethiopia earlier in 2015. (Photo: UNHCR/R. Riek)

Many countries in the United Nations would like to see the Palestinian Arabs gain self-determination and have their own country.  However, many of the ingredients for a failed state currently reside in the political structure of the Palestinian Authority:

A country built on this framework would likely deteriorate.  Factional fighting to dictate the future of the country would exacerbate. Unemployment would further skyrocket.  Cross-border battles with Israel would escalate and also include the area east of the Green Line, EGL/ west bank of the Jordan River. This region, which already leads the world in the “honor killings” of women, would likely continue to see such murders increase.

It would be a country built in chaos, with people’s dreams dying alongside their lives.

Should the Palestinian Arabs hope to achieve a functioning state after self-determination, important steps need to be instituted before the state is formed:

These are the basic steps that must occur for the Palestinian Authority to have a functioning government. Once the central authority rests in a representative body, that entity can negotiate a final status agreement with Israel to create a new state. To minimize the chances that it slip into a failed state, the Palestinian government should further consider the following:

While the world celebrated the founding of a new country four years ago in South Sudan, the declaration proved a hollow victory for the people. It would be a mistake to push forward another declaration for Palestinian Arabs at this time which would lead ultimately lead to further suffering.  Mayhem with a flag benefits no one.