The United Nations Human Rights Council (UNHRC) produced a report in the spring of 2015 about the war between Israel and the Palestinians in the summer of 2014. The UNHRC continued with a debate in June 2015 in which several “delegations strongly condemned Israel’s excessive and disproportionate military aggression against the Palestinians” including from: Egypt; Tunisia; Maldives; Iraq; South Africa; Indonesia; Ireland and Cuba.

The foremost responsibility of any governmental leadership is to protect its population.  Such defense can be implemented in a variety of ways: a police force or army to maintain order; infrastructure to ensure safety; and intelligence which can guide the appropriate use of manpower and equipment.  The United Nations has been developing a framework for “The Responsibility to Protect” over the past several years.

Protecting Against Incoming Missiles and Armaments

Bunkers and Bomb Shelters: Israel is unique in the Middle East in establishing a policy of bomb shelters throughout the country. In response to being surrounded to hostile neighbors that have attacked and shelled its people and lands since its inception, houses, schools, hotels, hospitals and even playgrounds are built with bomb shelters.

The Palestinians have not built shelters. Instead, they used their cement to build tunnels with which to attack Israel.

The Palestinians have neither developed nor imported defensive systems. They have only imported offensive weaponry. 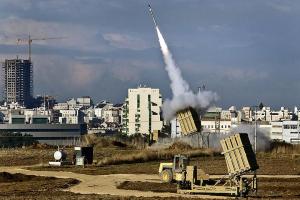 Blockade of Gaza. Israel imposed a naval blockade around Gaza after the terrorist group Hamas, which is sworn to the destruction of Israel, seized the land. The blockade has successfully kept out many missiles and other arms from reaching Hamas and ultimately causing death and destruction in Israel.

Security Barrier. In September 2000, the Palestinians began multi-year riots which killed over a thousand Israelis through hundreds of attacks. In response, the Israeli government began to construct a security barrier in 2002 to keep out terrorists who mostly emanated from cities in Judea and Samaria/ east of the Green Line (EGL).

The Palestinians have not built any security barriers from the Israelis. There have been no suicide bombers going from Israel into Gaza or EGL blowing up civilians.

Airport Security. Well before the world became attuned to airport security after the attacks on the United States on 9/11/01, Israel established an extensive airport security system. The screening of passengers, x-rays of baggage and other methods were in response to a series of airplane hijackings in the 1970s (a method of terrorism created by the Palestinian Arabs).

The Palestinians do not have an airport and therefore no such security concerns.

Intelligence. Israelis utilize a wide variety of information sources to uncover plans to attack its country. Whether through a network of Israeli spies, Palestinian informants, money tracking, wiretapping and other means, the Israelis gather information and make assessments on potential Palestinian Arab attacks. It is then able to take preventative action before such attacks occur.

Relying on Israeli Sensitivities and Sensibilities

Civilians. As detailed above, the Palestinian Authority and Hamas have not instituted proactive tangible means of defending its people. One of the ways it attempts to defend the population is by making it nearly impossible to distinguish between fighters and civilians.

Palestinian Arabs hope that Israel will not indiscriminately fire upon everyone. By forcing Israel to take time and extra precautions to target the right attackers, it slows down Israeli defenses during battles. 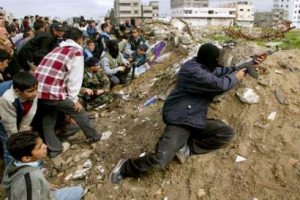 Destroying its Own Infrastructure. Hamas built an extensive offensive network of tunnels into Israel which originated in many private homes. By relying on Israelis sensitivities to minimize destruction in civilian neighborhoods, Hamas was able to protect many tunnel openings.

Further, Hamas and other Palestinian Arab groups often booby-trapped homes from which they attacked Israel. While the Palestinian Arabs destroyed their own infrastructure, they slowed down and killed many Israelis who looked to root out the attackers.

United Nations. One of the principal methods that the Palestinian Authority uses to defend its population is through global bodies AFTER a war. The United Nations includes 57 Islamic countries (in the OIC) and 22 Arab countries (in the Arab League) which align themselves with the Palestinian Arab cause. Many of those countries do not even recognize the State of Israel. They were instrumental in passing the “Zionism is Racism” resolution in 1975 and creating several committees devoted only to Palestinian causes.

The Palestinians turn to the UN to highlight the damage that Israel inflicts on its intentionally defenseless population. It uses deliberate attacks on Israel to provoke premeditated casualties to show the world.

This same UN has not condemned the Palestinian Authority for not properly defending its population. Instead, it recommended the incredulous idea that Israel must give the Arabs the defensive systems like Iron Dome that it developed.

As detailed above the two sides in the Israel-Palestinian Authority conflict have disproportionate defenses.

A discussion of “disproportionate force” cannot be made in a vacuum without discussing “disproportionate defenses”. The global community cannot continue to sanction the acts of a leadership that deliberately deals in its own premeditated casualties.

Israel: Security in a Small Country

The International Criminal Court for Palestinians and Israelis

The United Nations Audit of Israel