Summary: Antisemites calling Jews “unclean” is their first step towards calling for purifying them from the world. How should the world respond?

There have been a number of political leaders who have called Jews “unclean”: 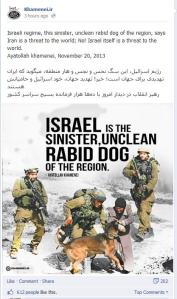 It did not take long for these leaders and parties to move from their initial anti-Semitic positions, to calls to eradicate the Jews:

One can call Abbas a “moderate” in comparison to those around him in that he has not openly called for killing Israelis (he prefers the indirect method of honoring and celebrating those that do kill Israelis).

President Obama commented about ISIS (2014) that “the world must never cease in seeking to defeat their evil ideology.” Such evil ideology is the open platform in the Iranian and Palestinian leadership.

As Obama is actively engaged in dialogue and negotiations with both of those parties, does he think

The Palestinians War Against the Jews

Before recognizing a Palestinian State, Recognize what the Palestinians are saying

13 thoughts on “The “Unclean” Jew in the Crosshairs”