I first came upon the “Save the Children” organization when I saw that they sponsored an appeal to raise money for Gaza in a poster in the London Underground. The name of the group sounded so innocent and well-meaning. Who is more innocent than a child? Who could possibly be against helping children? Can helping children ever be considered a biased agenda? 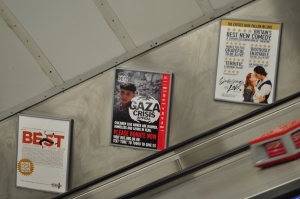 Save the Children sponsored poster on Gaza,
London August 2014

Some days later, I came across a retail thrift store bearing the STC name in Bath, England. Posters in the store window contained two new appeals to help rebuild Gaza and to stop the “Israeli” War in Gaza. There was no appeal or comment to stop the Palestinian war against Israel. I decided to look into the group on their own website.

The President & CEO of STC, Carolyn Miles, posted a blog called “Gaza’s Miracle Tomatoes” on July 8, a day after Israel launched Operation Protective Edge to stop the bombardment of Palestinian missiles into Israel. It was her first ever (and currently only) post about Israel or Gaza.

In the column she describes the “bleak landscape” and “dusty barren patches” of Gaza. The scene contained “donkeys pulling carts filled with rubble and surrounded by men and boys along harsh, rocky earth”.

The blog continued that 20 minutes away from the bleak picture along the border with Israel, a “miracle” appeared from nowhere: “a lush green field …a simple greenhouse …row after row of beautiful tomatoes … the result of a recently-concluded project by Save the Children and other partners and funded by USAID.” This oasis painted by Miles intentionally gave a reader the specific impression that STC helped create a miracle from nothing in the terrible Gaza landscape. It contained three significant lies of omission:

The STC piece continued: “we drove through the streets of Gaza and heard from residents about the impact of border crossing restrictions on children there—the rising rates of malnutrition and resulting stunting, the lack of basic medicines and care when children became sick, and the severe circumstances disabled children were in.” The article had now moved past being the miracle machine and placed blame for the situation on Israel (for border crossing restrictions), and continued with outright lies:

Save The Children claims it does not choose sides, it just chooses children, but is that factual? Is the characterization that the children of Gaza suffer because of the actions of Israel – as opposed to the actions of their parents – really not taking sides? Is a minute and one-half video featured on the STC site that only shows bombings in Gaza (and nothing in Israel), not choosing sides? Has STC helped fund a single bomb shelter just a few miles away, in the targeted playgrounds of Israel?

A bigger question for Save the Children – and the world – is how do you protect children from their own parents?

Palestinians ransacking the greenhouses in 2005: http://www.haaretz.com/news/palestinian-militants-ransack-former-gush-katif-greenhouses-1.179788

6 thoughts on “Save the Children”