Pulitzer Prize winner William Safire used to write for the New York Times “On Language.” His fascinating articles would describe the etymology of words; their usage and context. He spent years as a speechwriter for US President Nixon, followed by decades writing for the Times. He had a unique appreciation for words.

Safire would not appreciate the New York Times abuse of language today.

Some words are seldom used in daily speech. When heard or seen, we understand that there is a particular purpose and nuance for their application.  Even in comedy.

The old TV sitcom “Seinfeld” had a funny skit about George being set up on a blind date by his friend Jerry. George had a long list of questions to qualify his interest. When asking about her face he said: “Is there a pinkish hue?” The question puzzled his friend Jerry who was setting him up: “A pinkish hue?” he replied. “Yes, a rosy glow.” Jerry: “There’s a hue”. The exchange gets roars of laughter – not only because it is an absurd question to qualify a date, but the word itself is peculiar. I doubt there was ever a time in the history of television that the word “hue” was used so frequently.

We all (think we) know what the word “hue” means – heck, there was even a setting on our TV sets after “brightness” and “contrast” (but being candid, no one ever used it). The word “hue” was replaced by “color” or “tint” on many sets as those words convey a wider spectrum of color. Hue seemed too subtle.

If “hue” is subtle, the word “tinge” is meaningless. While “tinge” may be a slightly more common word, it means a great deal less.  Finding the TV’s hue setting and moving it a single notch, would be the equivalent of “tinge”. Only an expert could readily observe the slight change in color. A reasonable person could never be expected to notice a tinge without close and careful examination.

It was curious (alarming?) to see the word “tinge” show up in an article about “The Confrontation in Gaza”, as the New York Times refers to current war in Gaza (avoiding using Israel’s terminology of “Operation Protective Edge” as that might make it appear that Israel was on the defensive).

On July 24, 2014, the New York Times ran an article called “As Much of the World Frowns on Israel, Americans Hold Out Support” about how angry the world is with Israel. Americans, according to the article, do not support Israel because they believe that Israel has a basic right to self defense in the face of missile attacks, but because “of the failures of the Arab Spring to spread democracy in the Middle East.” That NYT statement is beyond moronic and ignores the entire Pew report and decades of Pew Surveys which have always shown greater support for Israel than Palestinians.

The following paragraphs continued: “Pro-Palestinian demonstrations are continuing in Paris, Berlin, Vienna, Amsterdam and other European cities, some of them assuming an anti-Semitic tinge.” Quite a phrase “anti-Semitic tinge”.

So what happened in the protests the preceding weeks? On July 20 anti-Israel protestors firebombed a synagogue in the Parisian suburb of Sarcelles. Jewish shops were looted and 18 people were arrested. The French Prime Minister said: “What’s happened in Sarcelles is intolerable: attacking a synagogue or a kosher grocery, is quite simply anti-Semitism, racism.”

Just the week beforehand, a demonstration in Bastille Square in the center of Paris moved towards two synagogues which had hundreds of Jews trapped inside. The crowds chanted “death to the Jews” and “Hitler was right”. That demonstration was such a warning shock to the government that it banned further demonstrations, which took place anyway.

In Belgium, a store with a Palestinian flag and a crossed out Israeli flag in the window put up a sign in Turkish: “Dogs are allowed in this establishment but Jews are not under any circumstances.” The French text replaced “Jews” with “Zionists.”

In Berlin, Germany protestors were blocked by police in riot gear from bringing their demonstrations to the Holocaust Memorial. That week, an imam at one of Berlin’s mosques gave a sermon that Jews should be killed.

The Associated Press correspondent from Berlin wrote: “The foreign ministers of Germany, France and Italy on Tuesday condemned the rise in anti-Semitic protests and violence over the conflict in Gaza, saying they will do everything possible to combat it in their countries.”

The New York Times deliberately chose to minimize the anti-Semitic motivation of the protestors as it would detract from what the Times considered an appropriate act of protesting against Israel (since the Times doesn’t believe the “confrontation” is truly about self defense). Even as riots broke out in the same cities that witnessed the Holocaust, and those governments called out against the rise in anti-Semitic protests and violence, the Times needed to bury that narrative.

For the Times, “an anti-Semitic tinge” means a few outliers; some bad seeds doing bad things. It ignores the lack of protests against: Russia in the Ukraine; Syria slaughtering its citizens; US in Iraq and Afghanistan; and other government actions in the world that have killed hundred of thousands of civilians over the past few years. Regrettably, the Times does not agree that when protestors only take to the streets when the Jewish State is in a “confrontation,” it brands the protest itself as anti-Semitic.  How does it ignore firebombings of synagogues?

Those actions are from the disgraceful anti-Semitism of the protestors. Regarding the media, it is bad enough that it is passively complicit in not identifying the anti-Semitic root cause of the protests. However, to actively trivialize riots, firebombings and death threats against Jews in the streets where millions of innocent Jews were killed, is not merely being complicit- it is an act of anti-Semitism itself.

Let me change the conclusion of the opening paragraph: William Safire would not be upset by the Times use of language.  He would be appalled by the New York Times abuse of Jews. 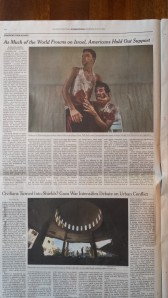 23 thoughts on ““An anti-Semitic Tinge””