Roger Cohen penned a piece in the New York Times Op-Ed on July 15 that suggested the pathway to peace in the Middle East is that “Jews should study the Nakba. Arabs should study the Holocaust.” Putting aside the naiveté of the suggestion, the comparison is disgusting in itself.

The Holocaust was a genocide of a people. It was a deliberate attempt of an elected government to commit genocide against a select group of its own citizens. As Nazi Germany conquered more territory, it continued to implement its plan of eradicating the Jews – which it deemed an inferior life form – in those additional lands. Not satisfied with only killing millions of innocents, the Nazis tortured and performed medical experiments on these unarmed men, women and children. It was one of the darkest periods of mankind.

The Palestinian Nakba was a civil war over control of land. Arabs in Palestine protested to the ruling authority (the British) to block the establishment of a Jewish national homeland as called for by the League of Nations (the precursor to the United Nations). The Arabs themselves initiated the fight to stop the implementation of international law, and launched multi-year riots and then a war to destroy Israel. Their Nakba was that they were not allowed to return to homes in the country they just sought to destroy.

How are these two events remotely comparable?

The events could not be more different. The only things they have in common is that they occurred around the same time in history and both involved Jews.

But Israel was not born from the ashes of the Holocaust and planted in the ground of a Palestinian Nakba. The only “fruit” of the Holocaust was the creation of the Universal Declaration of Human Rights. The preamble of the UDHR clearly stated that the “disregard and contempt for human rights have resulted in barbarous act which have outraged the conscience of mankind,” – the sickening actions of the Holocaust created the declaration meant to benefit all mankind.

Regarding Palestine, Jewish history in the land predated the Holocaust by thousands of years. The Ottomans welcomed Jews and they moved throughout the region from 1800 to 1914 at rates that dwarfed all other groups. After the Ottoman Empire broke apart, the League of Nations sought the “establishment in Palestine of a national home for the Jewish people” in 1920, decades before WWII. The Arabs rioted in 1920 and 1929 against the action, and in 1936 began what has become a 78-year running civil war to prevent – and later eradicate – the Jewish State. The Arab “Nakba” – their grievance about homes destroyed and left behind – is because they lost the battle they initiated. The “fruit” of the Nakba was the establishment of UNRWA by the United Nations which has encouraged the Arabs to never abandon their civil war. The rotten fruit has left the Palestinians to fester and subject to abuse by their host countries, including Lebanon and Syria. It has benefited no one.

Perhaps the first person to learn about the Holocaust and the Nakba is Roger Cohen.

The Times should be reprimanded for continuing to print pieces that give legitimacy to those who compare Israel to Nazi Germany and Netanyahu to Hitler. It gives cover to anti-Semites in Europe and the world who paint the Jewish state in Nazi colors. The term “Never Again” born from the massacres of innocents in the Holocaust means more than not allowing genocides to happen again. Civilized people should not trivialize evil. For a global paper like the Times to do so specifically against the Jewish State is reprehensible. 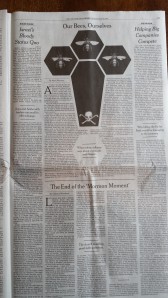 36 thoughts on “The Holocaust and the Nakba”